Physical properties of polymers, liquid crystals, colloids, and amphiphilic molecules are softer than those of solids and thus are called “soft matter.” Soft matter is used everywhere in our daily life such as in green products or functional materials. It is also the basic component of living substances such as proteins and cell membranes. Our main subjects are to investigate the structural properties of soft matter by means of neutron reflectivity, neutron spin echo, neutron small-angle scattering, X-ray small-angle scattering, and light scattering .

Most soft matter has hierarchical structures, from atomic scale to macro scale, due to the competition between interaction, such as Van der Waals force and electrostatic force as well as entropic effects. We are conducting research on these structures focusing on nanoscale ordered structures and their dynamical behavior. In particular, we are studying

When an oil droplet with a fatty acid is dropped onto a surfactant aqueous solution, it spontaneously moves like an amoeba. At the interface between the water and the oil, gel-like aggregates are generated and blebbing motion of an interface has been observed. We investigated the nano-scale structure of this aggregates by means of Small-Angle X-ray Scattering (SAXS) and Small-Angle Neutron Scattering and found the ordered lamellar structure. From these kinds of research, we may approach the origin of the spontaneous motion of living systems.

Structure formation in a model bio-membrane

Cocoa butter in chocolate is like a capsule that confines the cocoa mass and sugar, which are related to the taste of chocolate. Although cocoa butter is almost tasteless, its physical properties are determined by the crystal structure of cocoa butter and it governs the food texture of chocolate. There are six types of the cocoa butter crystals, form I VI, in which how molecules are packed depends on the crystal type, as do its physical properties such as density and melting point. The form V crystal has a high density and its melting point is about 33ºC, which is most suitable for chocolate. It has an excellent snap when broken in room temperature and a smooth texture when it melts in the mouth. Research is ongoing to effectively produce the form V crystal by studying its structure in cocoa butter using neutrons.

Schematic diagram of chocolate and an observational example of the crystal growth of cocoa butter.

Study of friction and lubrication using neutrons and muons

Controlling “friction” at the interface of substances is very important to improve green products. “Lubrication” to reduce friction and wear is also important; however, there are many unknown factors in the basic principles of lubrication that need to be elucidated. We are conducting research on friction and lubrication, i.e., tribology, using neutron reflectometry, with which the interface between substances could be observed directly, and neutron quasielastic scattering and muon spin relaxation, with which dynamical behavior of molecules and molecular assemblies could be investigated.

Study of friction and lubrication at an interface using a neutron reflectometer. 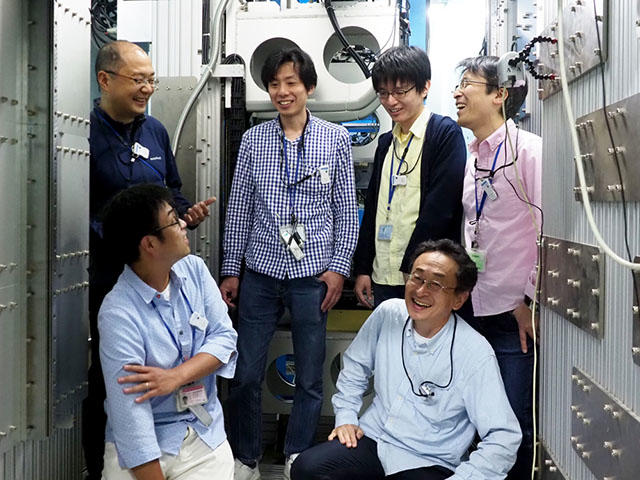