The 2021c run of SuperKEKB started on October 19th and ended successfully on December 23rd. Continuing from the previous 2021b run (April 1st to July 5th), the physics experiments at Belle II had been conducted with a vertical beta-function at the collision point of 1 mm, while gradually increasing the beam currents to improve the luminosity. In parallel to the physics experiments, various accelerator studies had been intermittently performed as necessary. The beam currents had been successfully increased up to 1020 mA and 800 mA for the positron ring (LER) and the electron ring (HER), respectively, with 1370 bunches by December 18, thanks to great improvement in the injection efficiency by careful injection-beam tuning, the establishment of a safe procedure in increasing the beam currents, and so on. The physics experiment with these beam currents had stably continued until the end of run. Note here that a beam current of 1020 mA of LER is the highest value in SuperKEKB (Fig. 1).
On December 23rd, a peak luminosity of 3.81 x 1034 cm-2s-1 was achieved and renewed the world record (Fig. 2). In addition, the 1-day and the 7-day integrated luminosities also broke the previous records with 2.22 fb-1 and 12.62 fb-1, respectively. The recorded total integral luminosity of 2021c run was 54.4 fb-1 (Fig. 3). In the period from November 10th to 29th, a so-called energy scan had been conducted in which the collision energy was sequentially changed from the normal Y (4S) = 10.5794 GeV to four points in the range of 10.657 to 10.810 GeV. Necessary and sufficient integrated luminosity was successfully obtained at each energy point.
The next 2022a run is scheduled to start on February 21st, 2022. The physics experiments will be continued while aiming for higher luminosity. Various beam studies essential to effectively improve the future performance are also planned. 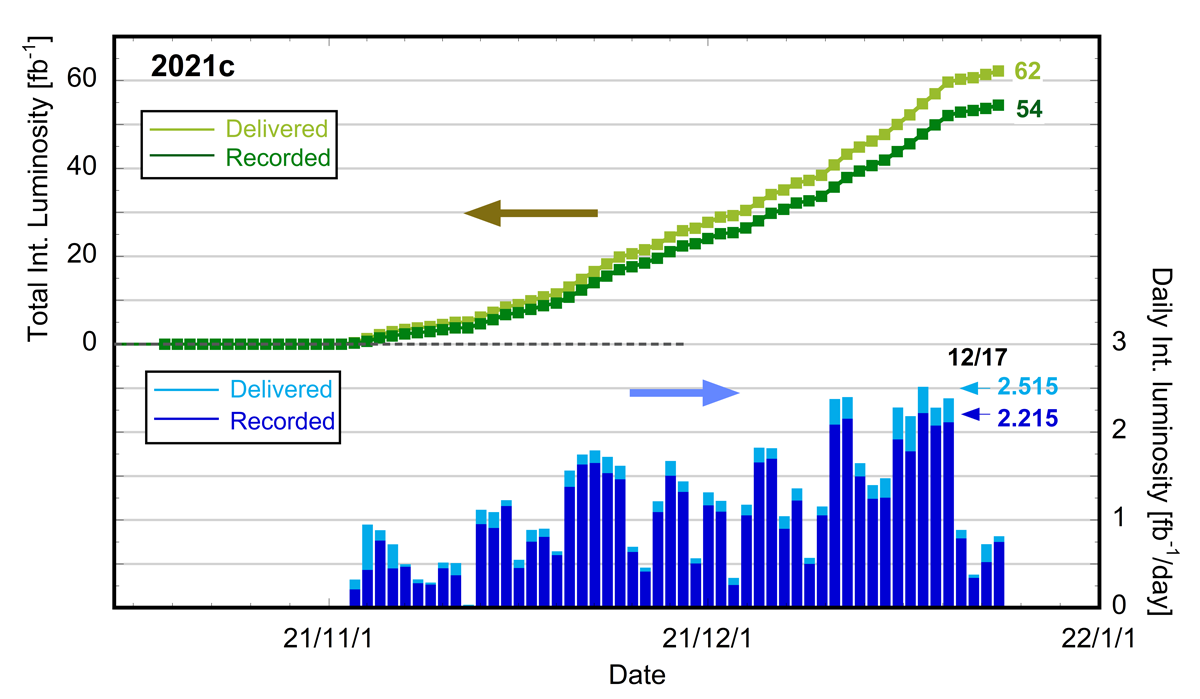 Fig.3：The total and the daily integrated luminosities in the 2021c run. “Recorded” means the luminosity while the Belle II is running (dark blue and dark green in the figure). The maximum daily integrated-luminosity was 2.22 fb-1 in this run, which also surpassed the previous record of 1.96 fb-1 so far.

The Graduate Univ. for Advanced Studies

Applying to do Research